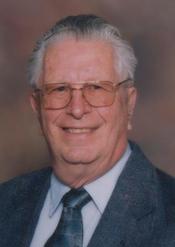 He was born in Chelsea, MA on February 24, 1929. His parents were the late Maverd and Emolyn Estabrooks.

Bill grew up in Revere, MA and graduated high school in 1947. He then joined the US Navy in 1950 and served during the Korean War. During leave he married his sweetheart, Marilyn on April 29, 1952. Upon his discharge from the Navy he went to work for GE. While working at GE, he attended Lowell Institute at MIT and graduated from North Eastern University with a Bachelor Degree in Engineering and Management. He later moved to Wilmington in 1980 to work at GE and retired in 1990 with 43 years of service.

Bill was a member of Pine Valley United Methodist Church, he enjoyed Square Dancing and Round Dancing along with his wife for over 57 years, bowling and wood working.

The family will see friends from 10 to 11 am on Tuesday, November 5, 2013 prior to the funeral service to begin at 11 am at Pine Valley United Methodist Church officiated by Rev. Tim Reaves and Rev. Trish Archer. Burial will be in Greenlawn Memorial Park. Military Honors will be by the American Legion Honor Guard.

Memorial gifts may be made to Alzheimer’s Foundation.