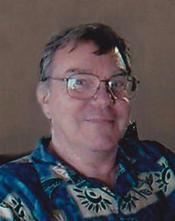 William Edward Moore known as “Ed” passed away April 30, 2012. He was born September 15, 1938 in Goldsboro, NC to the late Ermine Hales Moore and James Victor Moore.

He is survived by his wife of 21 years Deanne Heath Moore; stepdaughter, Alea Cave and her husband, Chris, their children Tanner and Holden; stepdaughter, Kathryn Danielson and her daughter Katelyn; sister, Carol Franks; and three nieces and a nephew.

In addition to his parents, he was also preceded in death by a brother, James Richard Moore and a nephew.

He became a paraplegic at age eighteen. Before going on to have a successful career as an architectural designer. He owned Moore’s drafting service for over fifty year’s.

He attended Holy Cross Episcopalian Church and was a retired member of the American Institute of Building Design.

In lieu of flowers donations may be made in his name to Holy Cross Episcopal Church or Lower Cape Fear Hospice, 1406 Physicians Drive Wilmington, NC 28401.