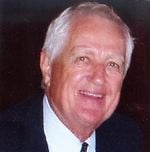 William E. Mothorpe of Hampstead, NC died after a brief illness at his home on January 5, 2008.

Bill had a magnificent journey through life, but all too short for all the plans he wanted to accomplish here on earth. He leaves his wife Joyce “Joy” of 50 years, his only daughter Kelly M. Ogrin, two grandsons, Christian Tyler Mothorpe Ogrin and Dylan Patrick “Mr. “D” Ogrin, and their father Patrick J. Ogrin. Bill wanted to live on to see his grandsons grow into strong, meaningful adults and be proud of their accomplishments. He had one sister, Shirley M. Campo of Forest VA., sisters-in law and brothers in-law Burdette and Mary E. Sauerbier, Donald and Jane Boyd, Clyde and Dolly Boyd, Dansville., NY, William
J. and Marilyn Boyd of Madison Heights MI, and John and S. Jean McKay of Cornelius, NC, many nieces, nephews, cousins, friends and neighbors who meant a great deal to him.

Bill was born on November 19, 1934 in Rochester, NY to the late Russell John and Anna Elizabeth Stoddard Mothorpe. He graduated from Dansville Central High School in 1953. In high school, Bill excelled in basketball, football and track. He attended Ithaca College with a basketball scholarship; he later joined the United States Marine Corps and served from 1954 to 1957. In 1958, he transferred to Florida Southern College in Lakeland, FL where he received the Omicron Delta Kappa Scholastic Achievement Award. He graduated from Florida
Southern college with honors in 1961. Bill began his Federal Government service with the General Account Office in Washington, DC in 1961. Throughout his career with the Federal Government, Bill received many awards. During his tenure with Small Business Administration, he received the SBA Superior Performance Award. In 1972, Bill received a one year sabbatical to attend the University of Southern California, under the Federal Executive Development Program. Shortly after completing this program and receiving his Masters Degree he returned to Washington DC to continue his career. He spear headed the first Electronic Funds transfer at the Department of Agriculture and retired from Government service in 1983 to enjoy his retirement life to the fullest in NC.

Bill’s love of life, and family was always his main goal and when he was presented with two wonderful grandsons, Christian and Dylan, life could not have been better. “Grandguy”, as he was affectionately known, was always there for the boys…delivering milk every Wednesday and literally acting as a totem pole on which the boys would climb.

There were few feats that Bill didn’t accomplish…He designed and built his home in Olde Point overseeing every brick that was laid, then meticulously cared for his family, home and gardens. Bill enjoyed every minute with his loving wife Joy, beautiful daughter Kelly and his grandsons. He brought light, laughter and joy in our lives every day. His sense of humor never ceased, he will surely live on in our hearts forever.

Many thanks especially to his doctors, Michelle Jones, J. Anagnost and staff, our family, friends and neighbors, who have been so supportive and helpful during this most difficult time.

A private family burial is planned at Oakdale Cemetery, with Rev. Robert Lapp,
Assoc. Pastor of St, Andrews Covenant Presbyterian Church of Wilmington
officiating. In lieu of flowers, memorial contributions may be made to America’s Second Harvest, The Nations Food Bank Network, Donations Processing Center, P.O. Box 8929, Topeka, KS 66608-8929 or the American Cancer Society, for pancreatic cancer research donations can be made online at their website at www.pancan.org or PanCAN, 2141 Rosecrans Avenue, Suite 7000, El Segundo, CA 90245.