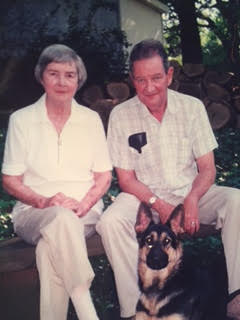 Bill was born April 24, 1932 in Scranton, PA. He lived in Berwick, PA with his grandparents until he was 12 and moved to Harrisburg. He remained in Harrisburg area until 2004 and then relocated to Wilmington, North Carolina to be close to family. The last 3 years he was a resident of Lakeshore Commons in Wilmington where he had many friends.

Bill served overseas in the U.S. Army during the Korean War. He spent most of his life working in the accounting department of the former Cumberland County National Bank and retired from PNC Bank in New Cumberland. He had a passion for dogs and especially German Shepherds. Most of his adult life he spent with a German Shepherd at his side. He was a long time dog trainer, club officer, and volunteer for Dauphin Dog Training Club. He also volunteered at the Harrisburg Humane Society. Bill enjoyed antique car shows, car races, reading and gardening. He was an active member and officer in the Saab Club in the late 1950s and early 60s, and collected Saab memorabilia.

Bill was preceded in death by his beloved wife, Betty Jane “BJ” Deavor. He is survived by his two sisters in Berwick area; three step-children: Nikki Reiber of Wilmington, NC, Gary B Krantz of Long Beach CA, and Tristan J Lloyd of Mesa, AZ; five grandchildren; 11 great-grandchildren; and numerous friends.
The family will convene to celebrate his life and fulfill his last wishes in a private ceremony. In lieu of flowers, the family requests donations be made to a local Humane Society or a no-kill animal shelter or animal rescue organization of your choice.

Please share memories and condolences with the family by clicking on the “Leave a Condolence” tab below.