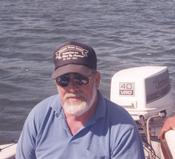 Born in Asheville, NC on March 18, 1945, he was a son of Flossie Sprinkle Brigmon of Spindale, NC and the late William Grant Brigmon, Sr. He was a member of Morgan Hill Baptist Church in Weaverville, NC and a former volunteer firefighter for Barnardsville Fire Department. He loved deep sea fishing and fishing at the outer banks. Junior lived for, and cherished his family and spending time with them.

Surviving, in addition to his mother, are his wife of 48 great years, Joyce Robinson Brigmon of the home; a son, Terry Brigmon (Debra) of Barnardsville, NC; a brother, Timothy Brigmon, Hilda Mull (Leroy), all of Spindale, NC; the loves of his life, his three grandchildren, Austin Brigmon, Ashton Brigmon, Allen Brigmon; and his loyal companion, “Petty”. In addition to his father, he was predeceased by a brother, Carl Brigmon.

A memorial service will be 1 pm Friday, February 1, 2013 at Wilmington Funeral Chapel with his grandson Austin Brigmon officiating. The family will receive friends immediately following the service at the funeral home.