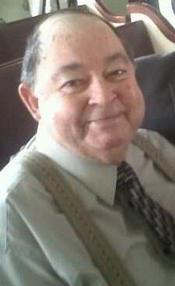 William “Bill” “Smitty” Lee Roberts was called from this life to be with his Lord and Maker, Jesus Christ, on Thursday, June 21, 2012.

He was born in Wilmington on July 11, 1938 to the late Juanita Batson Roberts and Benjamin Franklin Roberts and was raised by his grandparents, Stella and Lloyd Smith.

He graduated from New Hanover High School in 1957 and attended Cape Fear Technical Institute where he received an Associate’s Degree in Electrical Engineering. He retired from International Paper in Riegelwood, NC where he had worked for 42 years as an Electrical Designer/Engineer. He also owned and operated, Roberts Electric Co.

“Smitty” was married to the love of his life, Doris Jacqueline Hewett Roberts on February 11, 1957, a life time love for 55 years. He was an active member of the Apostolic Tabernacle under the ministry of Pastor Lundy Logue where he served on the Board of Trustees and was a worship leader for many years.

He was a son, husband, father, grandfather and a friend to many, but more than all of that he was a great man of God and a true and faithful servant.

The family will see friends from 6 to 8 pm Tuesday at the Apostolic Tabernacle, 712 Wellington Ave., Wilmington and at other times at the home. 237 Windchime Way, Leland.

His Homecoming Services will be held 11 am Wednesday, June 27, 2012 at the Apostolic Tabernacle officiated by Pastor L.E. Logue. Burial will follow in Oleander Memorial Gardens.

In lieu of flowers, donations may be made to the Apostolic Tabernacle Building Fund, 712 Wellington Ave., Wilmington, NC 28401.