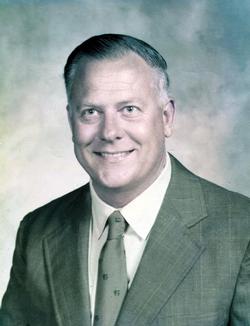 William Spurgeon Funderburg, father of Joseph Edward “Skipper” Funderburg, left his earthly life on January 24, 2014 to be with God. He passed away at his home, Pumpkin Creek, Wilmington.

A 1940 graduate of New Hanover High School, he entered service as an apprentice machinist at the Atlantic Coast Line Railroad, Rocky Mount, NC. He joined the US Army in 1943 and faithfully served his country in World War II. He served as a technical sergeant with the US Army 741st Battalion, during the Invasion of Normandy and the Battle of the Bulge. He was decorated with the US Army Triple Bronze Star, Victory Medal, American Campaign Medal, European – African – Middle Eastern Campaign Medal and the Good Conduct Medal.

After World War II, he returned to service at the Atlantic Coastline Railroad, ascending to General Diesel Supervisor and Roundhouse Supervisor at Wilmington Headquarters. After retirement he founded Atlantic Terminal Company in Wilmington, a general contracting firm. He married his high school sweetheart, Claire Fergus Funderburg, and the happy couple lived in Wilmington and Wrightsville Beach, where their two children were born and raised.

Williams’s life was filled with joy and love of his family, numerous friends and his lifelong service to humanity and his churches, Fifth Avenue United Methodist Church and Saint Paul’s Evangelical Lutheran Church. He was an active member serving as chairman of the board, past president of Methodist Men’s Club and counselor of United Methodist Youth Fellowship. He was a former Rotarian and a member of the Greater Wilmington Chamber of Commerce, serving on the Military Affairs Committee for five years and as the chairman. He was a member of the World Intellectual Property Organization.

He fully supported and promoted the first years of surfing in North Carolina, the formation of the Wrightsville Beach Surf Club in 1963 and the durable and well organized amateur surfing competitions that followed. He was a resourceful advocate of surfing and an environmental activist whose initiative focused on water quality.

He was supremely proud of his grandchildren Sarah Funderburg and Joey Funderburg and their outstanding achievements in their pursuit of spiritual, academic, physical and social excellence at Wilmington Christian Academy. He was delighted at their many victories on the golf courses across North Carolina and USA. He fully supported and promoted the Carolina Golf Association, Amateur and Junior Golf Programs.

We have lost a patriot and the patriarch of our family. He protected those in whose love he lived and those that are dear to us. He will be missed.

A Celebration of Life and memorial service will be announced at a later date. In lieu of flowers donations may be made to a charity of one’s choice.

The family would like to thank the New Hanover Medical Group for their wonderful care.

Please share memories and condolences by clicking on the “guest book” tab above.