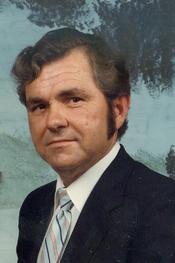 William Thomas King Sr., or “Thomas” as we all knew him, slipped peacefully into Heaven the afternoon of May 24, 2011.He was at home, as were his wishes, where he was surrounded by family, friends, and the love and mercy of God.

Thomas was born February 18, 1944. He was raised on a farm in Columbus County with 10 other brothers and sisters. He was a man of simple, humble beginnings, and he lived a simple, humble life. He was taught early the value of hard work, and he helped out on the family farm from childhood on. He later worked as a truck driver. He loved to travel and see new and different places. He eventually retired from Kenan Transport after an injury that forced him into disability. But he never stopped working. Thomas was not a man of extensive formal education, but he made up for it with his ability to fix, repair, or rewire just about anything. He never missed an opportunity to help out family or friends when they called with a problem, and he continued to do this until his recent death. He was a giver of wise advice. He was a speaker of kind word. And he was a man who loved the Lord, his family, and his country.

Thomas married Rosalyn on December 30, 1980. Two people took two broken families and created a union that resulted in one family of 4 children, William Thomas Jr., Christine, Robert, and Kirk. Thomas had a special place in his heart for little children, so he adored his grandkids; Karrie, Jessica, Eric, Lauryn, Jacob, Kaice, and Kenny. And he was later blessed with 11 great grandchildren. He loved spending time with his family.

Thomas had another great passion, and that was reading the Bible, which he did daily without fail, until the last few days of his life when he could no longer hold it to read. Then he loved to listen to the Word of God. It brought him peace, comfort, and the assurance that when he did let our hands go, it would only be to grasp the hand of Jesus instead.

Thomas was known to have once said…”You cannot measure the worth of a man in his wallet. You know the measure of a man by the love in his heart for God, and the sweat on his brow and the calluses’ on his hands from working hard to support his family.” Based on these words, Thomas was a man of immeasurable worth. He was greatly loved, and until we hug his neck again, he will be greatly missed.

Memorials can be made to Supply Baptist Church at the address above.

Please share memories and condolences with the family by clicking on the “Sign “”Guest Book” tab above.