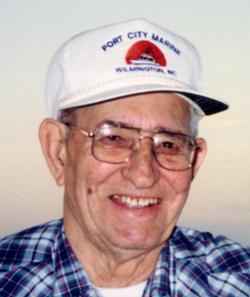 Wright Watters, a life-long member of the Middle Sound Community passed away at the age of 89 on August 31, 2014 surrounded by his loving family. He was born on July 27, 1925 to Charles and Lula Watters. He was the youngest of seven children, all of whom predeceased him.

Wright was a World War II Navy veteran having served on the USS LST-288 off the beach of Normandy on D-Day. After returning from the war, he worked many years as a route driver for Modern Laundry and later for several years for General Electric making many friends along the way before retiring in 1985. In his spare time, he could be found tending his garden or in the creeks and marshes around Middle Sound where he loved to fish and oyster.

Surviving to cherish his memory are his wife, Carol Hocutt Watters, to whom he would have been married for 65 years on September 24th and three children: Brenda West and husband Riley; Jimmy Watters and wife Teresa; and Paul Watters, all of Wilmington. He also leaves his beloved grandchildren: grandsons Steve West and wife Angie; Scott West and wife Marijean; and Zachary Watters and wife Blair, and four great grandchildren; Garrett, Laney, Brianna and Hunter West, all of Wilmington. In addition, he leaves special nieces Ann King and husband Robert and Myrtle Holt and husband Donald along with many other dear nieces and nephews and their families.

A Celebration of Life memorial ceremony will be held 8 pm Thursday, September 4, 2014 at Wilmington Funeral Chapel officiated by Rev. Wilbur Horrell and Rev. Randall Smith. The family will see friends beginning at 7 pm until the service time. A graveside committal service will be held 11 am Friday at Prospect Cemetery.

The family wishes to thank the wonderful staff at Lower Cape Fear Hospice for being with us and guiding us through this journey. Also, a special thank you to our CNA, Beth Carroll Smith, who faithfully tended to our Dad’s needs while he was still at home.