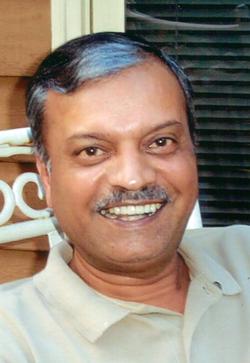 Yogi was born in Bombay, India on February 2, 1951. His parents were Ramanlal Boghabhai Shah and Kapilaben Ramanlal Shah.

Remembered are his daughters, Angela Lenhart and Crystal Johnson; brothers Depak Shah and Niragin Shah who preceded him in death.

Yogi was a graduate of Niagara University in Buffalo, NY and received his Masters Degree in Organic and Bio Chemistry from Gujarat University. He worked for Guilford Mills for 33 years as Director of Internet Technology, and later worked for The Villari Food Group until his medical leave. His interest included computers, electronics, cricket, chess, reading, fishing, travel, and spending time with his family and talking about education with his children, grandchildren, nieces and nephews. His son is who he is today because of his father’s influence on his life.

Yogi is survived by his wife of 33 years, Kimberly Patton Shah; son, Michael Shah and wife Jennifer; grandchildren, Aaron and Dylan Shah; Sabrina and Wesley Marshall; and Ashley and Andrew Lenhart; sisters, Parag Shah and Hansa Shah.; and many nieces and nephews.